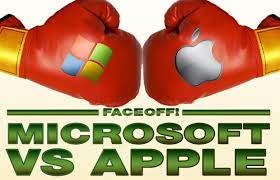 Apple and Microsoft are two computing giants that are seen as major competitors, right? I mean the public seems to be split into two camps: the snooty (personal opinion) Apple fans and worse-for- wear Microsoft diehards.

There is on-going bickering between the two camps but the reality is that these are two very different companies.

Apple has been very successful with domestic consumer products whereas Microsoft’s success comes from empowering businesses and enabling business activities.

iPods, iPads, iPhones, iTunes, iMacs, etc., are mostly instruments of domestic/leisurely activities whereas Microsoft’s operating systems and other software products pretty much run every major and minor business in the world. Even the end user products, such as MS Office, are primarily business tools.

Microsoft had never had much success with consumer products. They made forays into smart phone and tablet computing long before Apple did, but nothing much came of it.

On the flip side, as an enabler, they are responsible for the success of such giants as Dell, Hewlett Packard and countless others who used Microsoft’s software to build very successful businesses of their own.

Unfortunately, lately, due to either greed or lack of understanding of the true nature of their business, Microsoft decided to copy Apple and ventured into the consumer-side of the equation with their own tablet and phone hardware.

They failed miserably and in the process alienated their key partners such as Dell, Hewlett Packard and Samsung, who all went over to Google.

It seems that Microsoft did eventually recognized their error, which is evident from the sale of Nokia and the acquisition of LinkedIn. This is the right move for them because LinkedIn is a business enabler kind of product and is congruent with the intrinsic nature of the company.

Whether or not you agree with my analysis of Microsoft’s business strategies, the point is that every company has an intrinsic underling nature, and its successes and failures stem largely from the top management’s understanding (or lack thereof) of what that nature is.