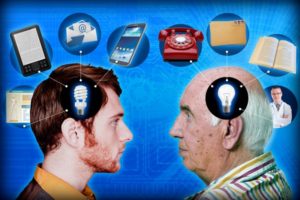 As I walked up to the entrance of my gym the other day, the glass doors automatically retracted to let me in.
I was suddenly struck by how miraculous this ordinary event really was: the doors knew I was coming and opened up by themselves!

Yes, of course I’ve experienced it a thousand times before, just like everyone else.
Yes, I know and understand exactly how it all works, the technology behind it – that’s not the point.

Just because it became mundane, it doesn’t mean it’s not miraculous. I mean think about it: self-opening doors!

We are so busy living up to our own and other people’s grotesquely over-inflated expectations that we do not notice what a real age of miracles we live in. We truly miss the forest for the trees.

If you organize all of our technological achievements along an imaginary timeline, there would be only a few momentous spikes such as learning to use fire, invention of the wheel, appearance of the first engine, etc.
Our modern time – the time that we live in would stand out like a gigantic, off-the chart spire.
There has literally not been a more exciting time to live in (so far, anyway).

If we were visitors from the distant future, come back to witness the birth of the civilization, we’d probably skim over the first 12 thousand or so years and begin to pay attention from the time the Internet appeared.

Self-opening doors aside, the miracles of modern technology are too numerous to recount.
We have experience with online identity verification provided by companies like Fully-Verified.
We have instant communication. We have all of the Humanity’s knowledge at our fingertips. We can travel around the world in less than 24 hours – miracles upon miracles upon miracles.

But we ain’t seen nothin’ yet. Nano Technology, Quantum Computing and Genetic Manipulation are poised to transform the world as we know it into something totally magical.

Do you realize how lucky we really are to have the front row tickets to this grandest show in the history of Humanity?

There has been an estimated 100 billion people who have ever lived on Earth.
A little more than 7 billion are living today. Of those, a vast majority (around 5.5 billion) have little or no access to technology.

The remaining 1.5 billion are too busy squabbling with each other or keeping up with the Joneses to stop and notice something as mundane as self-opening doors. Or self-driving cars. Or the robot who answers your telephone banking inquiry.

We take it all in stride – all these miracles – and use them for the only thing we really care about: ego gratification.
Instead of being enchanted by all this magic, delighting in the opportunity to be a part of it and play a role in this grand adventure, all we do is whinge, complain and stress over things that don’t matter.

I’m not dissin’ you – I’m guilty of it myself. We all get sucked in by our fragile egos into a tunnel vision of life. Sometimes though a simple thing like self-opening doors can snap you out of it, at least for a little while.

The next time you step on an escalator, send a text message to a friend or play a song on your gadget, remember how fortunate you really are to be alive and to be alive now.