This topic can get rather controversial, so from the start I want to say that the following is simply a perspective, one of many, and I don’t insist that it’s THE answer, but it is AN answer, and it might just make sense to you, so I offer it.

The Glass Ceiling is defined as “the unseen, yet unbreachable barrier that keeps minorities and women from rising to the upper rungs of the corporate ladder, regardless of their qualifications or achievements”.

There are great debates about whether the Glass Ceiling is real or something concocted by disgruntled employees. It’s not uncommon for different people in the same organization to have diametrically opposing views on whether the problem exists in their organization.

When the problem is real, it is an uphill battle trying to change the minds and the attitudes of people responsible for the culture and it can lead to a long-term struggle. As you can imagine, it’s even harder to fix when the problem isn’t real :-).

Refuse to hear the disparaging remarks. If you get passed up for a promotion, decide that it is because it’s not your time yet. Don’t give in to the negative mentality, don’t let them make a victim out of you. Or a martyr. Only focus on the positives, behave confidently and you will break through whatever ceilings there might or might not be. 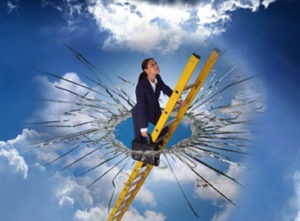 Don’t play other people’s games – make your own rules and create your own reality. It is easier said than done, of course, and if at first you don’t succeed – try, try again. If you learn and master this one skill, you’ll be unstoppable.

Better yet, rather than wait to be noticed, rather than depend on opportunities opening up, take control and consciously direct the development of your career through this exclusive workshop: Achieve Your Career Goals Faster