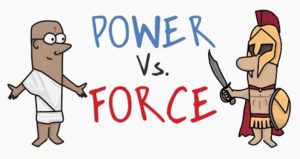 This is a difficult concept to convey in a short post, so I’m going to use an analogy that will hopefully help make the point.

In the First Gulf War (100 hour war) General Schwarzkopf took what some considered an excessive amount of time to study the enemy and plan the operation. As a result, he was able to achieve one of the shortest and most bloodless victories in the history of war. This is an example of using Power.

Schwarzkopf could also have won the war through a protracted ground offensive, taking advantage of overwhelming numbers of troops and more sophisticated weapons, but that victory would have been much more costly, both financially and in terms of casualties. It would also have been an example of using Force.

These are not some abstract ideas – they apply to anyone and in any situation, particularly in business and particularly at the level of upper management.

You can probably Force your way to achieving your goals, but you can, in most cases, use Power instead and get there faster and with minimal effort.

Implementing the FocusPlanAchieve methodology in your personal life, in your business or throughout your organization will provide the framework for using Power instead of Force, in everything you do.