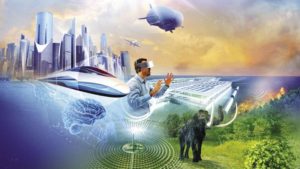 Do you ever stop to think about the times we live in?

Most of us are too preoccupied with our problems or the problems of the world to lift our heads up and look around. But when we do, the scenery is beyond amazing.

We think nothing of driving a car to work, taking an elevator up to the office in a high-rise building and using a phone to talk to people far away, but all of these are miracles.

When we take an escalator down to the food court and walk around looking at all the fancy offerings from different corners of the world, those are miracles too, though we don’t think of them that way. Instead, we’re likely thinking about something that happened or something that’s coming up.

Just like when we drive, we don’t think of the miracle of being propelled at speed in a warm, dry, cosy vehicle – we’re think of our destination and what we’re going to do there. Or maybe we’re still steaming over being cut off a few minutes ago by an asshole who, despite being given a driver’s license, still hasn’t learned to use indicators…

We have a fridge in our homes, so food does not go off. We can have ice at any time, no matter the season or the climate. We don’t need to carry water in by buckets from a well – just open a tap.
We have fire in the kitchen, which takes seconds to light and no need to cut wood or shovel coal.
Sewage and rubbish are taken away – no need to trouble ourselves there, either.

For thousands of years and countless generations, all across the world, people used candles to light their homes up at night. Now we just flip a switch.

All of these are miracles, but we don’t think of them that way. Instead, we complain when they don’t happen fast enough to suit our fancy.

Most amazing miracle of all, one that we’re ushering through right now, is how all of the information in the world is becoming available through a little device in your pocket. This miracle is so enormously big that we have trouble grasping the significance of it.

I think the full significance of the Internet will not be understood until centuries later, if then, but I do know that we have been given an unbelievable honour of being the first generation of Humans to live with this miracle.

We are the pioneers of a totally new way of living on the Earth. We are the ones who are figuring it out and setting things up for the generations to come.

We don’t really see it that way, of course. At times it seems that all we’re doing is trying to keep up with things that are moving at a break-neck speed. We certainly don’t feel like heroes doing it but to future generations this will be stuff of legends. I’m sure they will be very curious about what it was like to live on the cusp of two such different eras.

Right now, in my office lounge, as I’m typing this up, there’s a large flat panel TV on the wall that’s showing a 60-piece orchestra playing a masterpiece of a symphony by a genius who lived 400 years ago and 20,000 kilometres away. How is this not a miracle?

All thanks to the Internet. And thanks to you, thanks to all of us, because we are the ones who are ushering these miracles into the world – one little step at a time, even by simply noticing and acknowledging them.