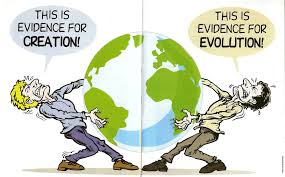 Are you a Creationist or an Evolutionist? Do you think there is a Creator or did we and the world around us just spontaneously develop?

For most people it is an ‘either-or’ proposition – they will either support creationism or evolution, each to the exclusion of the other. But what if it’s not one or the other, what if both are true?

How can that be? I will explain, but let me start from afar.

Back in my early years I was a computer programmer – and I LOVED it.
It was the potential for an almost unbridled creativity that hooked me in.

The process of creating something out of seemingly nothing fascinated me. I was turning ideas in my head into tangible creations that did something useful for people. These creations often took on a life of their own, as others picked them up and developed them further.

There are many ways in which a pattern can be written to achieve the same result – many different algorithms that can be employed. Some algorithms are straight-forward but long and tedious, others are more intricate and achieve the same thing faster and with less effort.
A prised thing in programming is an ‘elegant solution’, though no one usually knows whether your solution is elegant, unless another programmer looks through your code.

The reason I mentioned the above is because I believe it can serve as a helpful metaphor to illustrate how Creation and Evolution can co-exist.

The creationist literature stipulates that God created the Earth in seven days. Exactly what God was up to during this time remains a mystery. It is assumed that He somehow ‘willed’ the World into existence but if you think about it, there had to be some kind of a process He had to go through, which took seven days. Assuming that God is faster than the most advanced super-computer we have, seven days would account for an enormous amount of work.

What I’m getting to is that the creation of the World was not a matter of just snapping Divine fingers but a methodical and deliberate process of creation, much like writing a program.

And just like in programming, God would have to use algorithms, patterns of behaviour, if He wanted His creation to take on a life of its own. Evolution can be viewed as such an algorithm – albeit a very complex one.

If you ever wondered how a seed knows to grow into a tree, well, it follows an algorithm recorded in its DNA.

In fact, patterns (algorithms) can be spotted everywhere, both in the organisation of the inanimate Universe and the behaviours and development of animate creatures, including, most definitely, human beings.

You could say that the science of psychology is a study of behavioural patterns. Same goes for Astronomy, Astrology, Meteorology and any other ‘…ology’.

You will find patterns anywhere you look, if you care to see, and as you do, consider that Intelligent Design and Spontaneous Evolution are not necessarily as mutually exclusive as they may seem.